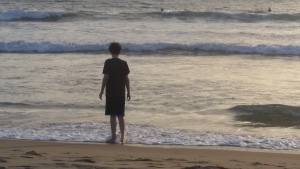 With curiosity and passion from the very start of his life, Cooper relished his earliest years growing up in Gig Harbor.  He loved his neighborhood, his adventures and his friends.  Cooper truly enjoyed his school days at Harbor Heights and Voyager Elementary Schools.  He commented that he was not looking forward to middle school, as elementary school was such fun.  Cooper was not in a hurry to grow up.

Although Goodman Middle School did not see a lot of Cooper, his love and aptitude for learning and consuming information continued daily throughout his life.  Cooper’s interests were expansive; from the Marvel and DC Universes, Star Wars, Harry Potter, Pokémon and Nintendo, to current social and political commentary. Whether strategizing a nerf war, battling video games or hanging out at a sleepover; Cooper valued spending time with friends.

Cooper’s competitive drive showed in all his activities, such as: completing Cub Scouts with honors, Little League, Peninsula Youth Football, Southern CA surfing, snowboarding and lacrosse.  Cooper was also an avid sports fan and spectator, loving the Seahawks and Mariners and also following basketball, hockey, the Olympics and fantasy leagues.

An animal lover, Cooper’s pets have included betta fish, a red-eared slider turtle, and dogs.  A reader, a foodie, sushi lover, a connoisseur of all games -Monopoly, chess, poker– Cooper always sought to include everyone. With a self-proclaimed weakness for carnival games, Cooper embraced risk for the sake of an adventure and never wanted anyone left out of the fun.

Trips to the Grand Canyon and Yellowstone National Park inspired Cooper’s desire to visit all of our country’s national parks.  He was also inspired to start a list of things to do in each of our 50 states.  Cooper was the event and holiday planner of our family. He enjoyed planning experiences of all types, including our final Caywood family of four journey to Walt Disney World.

Cooper’s adventurous spirit was impacted by a rare and aggressive cancer in September 2015. Throughout surgery, chemotherapy, radiation and drug trials, Cooper’s quirky, sarcastic sense of humor never wavered. Always ready with a joke, a pun, or a prank, he kept his doctors and nurses as well as his family and friends on their toes.  His physical body lost the battle to this beast of a cancer. However, his sweet generous spirit and his love triumph! Cooper will forever be alive in love in the hearts and souls of his parents, Chris and Karen Caywood; his older brother, Kellen; and all his family and dear friends.

Tumor tissue from Cooper has been donated to cc-TDI, Children’s Cancer Development Institute in Portland, OR and to Dana Farber Cancer Institute in Boston, MA to help further pediatric cancer and genetics research. Cooper’s corneas were also donated hoping to give someone the gift of sight.

To send flowers to the family or plant a tree in memory of Cooper Troy Caywood, please visit our floral store.

You can still show your support by sending flowers directly to the family, or by planting a memorial tree in the memory of Cooper Troy Caywood