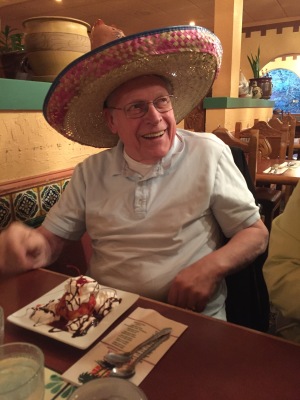 Harry lived his life well and to the fullest.  He was born in Tacoma WA  to Harry and Emma Sundberg.  He spent his youth in the Edgewood area and graduated from Fife High School.  He served in the navy during World War II and was on the first ship into Hiroshima after the Atomic Bomb.  He married the love of his life, Betty and they spent 30 years together till her death in 1981.  They raised four children and in 1961 moved to the Gig Harbor area.  Harry was an auto body mechanic for 40 years and retired from owning his own shop – Harry’s Auto Body. It was in retirement that he pursued his true love of the arts, drawing and painting portraits and landscapes.  He formed a weekly portrait drawing group through the Peninsula Art League that has lasted 30 years.  Harry was blessed with two more marriages in his lifetime, Marcheta and Merle, who both preceded him in death. Family and friends always came first and he was ever the supporter and encourager.  Sense of humor abounded everywhere he went. He was a member of St. Nicholas Catholic Church, Knights of Columbus, Elks and the Peninsula Art League.

He is survived by son Donald (Natayla) and daughters Sally, Judy (Roger) and Laura (Dennis); eight grandchildren, Daniel, Matthew, Kellie, Kristie, Angie, Carole Ann, Trent and Anastasia; 13 great-children and a large extended family.  He will be greatly missed by all.

To send flowers to the family or plant a tree in memory of Harry Eugene Sundberg, please visit our floral store.