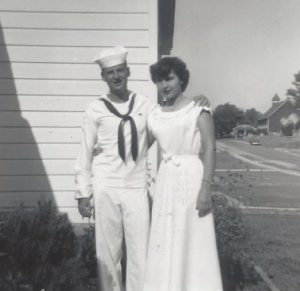 Richard (Dick) M. Glaser was born September 30, 1929 in Puyallup, WA to Joseph and Catherine Glaser and passed away May 16, 2019 in Gig Harbor, WA at the age of 89.  Dick served in the US Navy from September 1950 to July 1954.  During that time, he met his wife Golda and they married in September 1951 in Memphis, TN.  After completing college at both the University of Puget Sound and Central Washington University, Dick became a teacher for the Tacoma School District until he retired in 1989.

Dick is survived by his wife Golda and children; Katherine Sorgenfrei, Jeff Glaser (Claire) and Elizabeth Church (Kraig) and five grandchildren; Shelley Ramirez, Dylan Glaser, Emilia Glaser, Kaden Church and Maxwell Church and one great-grandchild, Mia Ramirez.  He is preceded in death by his two sons, Michael and Gregory Glaser.

Dick had a great love for the outdoors.  He spent most of his adult life fishing the Puget Sound, hunting in Eastern WA and tending to his yard. You could always find Dick putzing around outside chopping firewood, pruning trees, cleaning his latest catch of salmon or picking fresh veggies or fruit from his garden and orchard.  Dick was an avid reader who was a frequent visitor to the Key Center Library.  He read hundreds of books over the years and talked highly of the staff at the library.

One of Dick’s favorite past times was rooting for the Seattle Mariners.  He always looked forward to his Friday night ritual of pizza, beer and a Mariners game on TV.

Beloved husband, father, grandpa and friend, Dick will be greatly missed by all who knew him.  In lieu of flowers, donations to the Tacoma Rescue Mission would be greatly appreciated.  To donate visit: https://www.trm.org/donate/

To send flowers to the family or plant a tree in memory of Richard "Dick" Martin Glaser, please visit our floral store.

You can still show your support by sending flowers directly to the family, or by planting a memorial tree in the memory of Richard "Dick" Martin Glaser