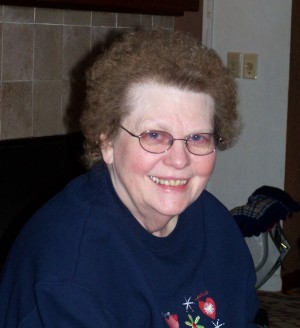 Betty Lorraine Damron was born April 18, 1938 in Portland Oregon to James Kendall and Gertrude Alma Damron.  She lived there until she was six, when the family moved to Beaverton onto a small farm, graduating from Beaverton High School in 1956.  Her father worked for the Post Office and started the very first rural mail route in Aloha just west of Beaverton.  Before this time, mail customers had to go to the Post Office itself to get their mail.  Betty would tell stories about riding on the route with her dad and knowing Rex the Postmaster.  The family moved back to Portland in 1957, after a Greyhound bus rear-ended her father coming home.  There Betty worked at their trailer park and laundromat.

At 18 months old she met her husband Don, when he first came home from the hospital, January 1940.  Interestingly, the Damron and Nees families knew each other well.  Both sets of parents knew each other before the parents were married.  On her 21st birthday Don called her for a date to a concert at Lewis and Clark College.  She immediately said, “Yes I’ll go with you.”  The date went with a chocolate milk shake with two straws.  Though they did not talk about going steady, they did.  Betty and Don Nees were married on June 3, 1961, and Don graduated 2 days later from Oregon State.

Betty’s family did a lot of traveling including all but two states.  With her input Don got a travelling job with the FAA for three years.  Shortly before their son Gary was born, they moved to Bremerton, Washington in Navy country, where Don worked for the Navy and requiring much less travel.  Gary was born May 27, 1964, and their daughter Donna was born September 29, 1968.  Betty was an active homemaker, involved in the kid’s schools, church, and teaching Sunday School.  Don retired out of Navy civil service in 1993, which led to more travelling, looking for their family roots, researching and collecting family stories, photos, and documents.

In the front of Betty’s old Sunday School Bible, it states she was saved at 5 years old.  It is full of stickers.  Both sides of the family were solid Christians, which trace back many generations to at least 1800.  Betty fell in love with genealogy along with Don and worked together.  She said many times that finding relatives was the real purpose, and she found many.  For example, she has two bookshelves in the den with six shelves full of family notebooks—all kind of documents, photos, and maps.  It was her personally made library, and a collection of numerous stories.  She actively wrote Damron stories with five stories being published by the Dameron-Damron Family Association.  She had strong purpose in her life.

Thanks to Dr Leverett, and St Anthony’s Intensive Care Unit for their compassionate care.

Remembrances may be sent to St. Anthony’s Hospital in honor of the ICU.

To send flowers to the family or plant a tree in memory of Betty L. Nees, please visit our floral store.

You can still show your support by sending flowers directly to the family, or by planting a memorial tree in the memory of Betty L. Nees
Share a memory
© 2021 Haven Of Rest Gig Harbor. All Rights Reserved. | Terms of Use | Privacy Policy