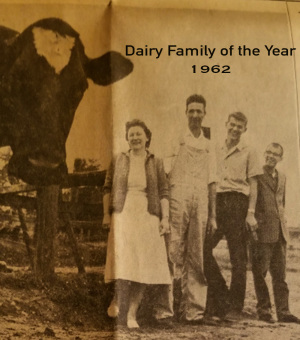 Born Betty Inez Geary December 29, 1916, in Tacoma, Betty grew up during the Roaring Twenties and then got hit with the Great Depression. As a Tacoma city girl she lived with four sisters and a widowed mother who kept family together by doing seamstress work. After graduation from Lincoln High School Betty worked as head bookkeeper for Washington Gas and Electric. During her early twenties she enjoyed skiing, biking, travel and scenic train rides. She shared these memorable times with a group of close friends she simply called the gang.

In 1942 she married Alfred J. Riebli of Swiss descent. She moved to Port Orchard to evolve into a country wife. On a 96 acre dairy farm she raised two sons: John and Tom. They delivered milk, tried running a store and settled on shipping milk to a processing plant. She learned to raise a garden, feed a crew, can vegetables and mastered sewing.

Betty was active in Bethel Community Church which later became Bethel Grace Bible Church. There she taught Sunday school classes, and had a major role in Missionary Society and Summer Vacation Bible School. Church work was always honored and central to her life. She was known to pile 15 or 16 kids into her Chrysler and make sure they got to Sunday School and earned their Bibles.

Betty was also known for her many skills. She was an amazing cook with to-die-for desserts, did crocheting effortlessly, sewed aprons and could tailor clothes or even re-cover couches, painted and then fired ceramics in her own kiln and ultimately dabbled in actual art. Family will probably create a rotating gallery of some of her best coveted pieces to avoid sibling war. In addition, Betty was a consummate storyteller, always creative and kind and just everybody’s really good friend.

She often mowed her yard with a riding mower and managed to live on the farm until her very late nineties. She drove until 96. Four years ago she sold the farm to grandson David and moved into Ridgemont Apartments where she resided at the time of her death. She was a friend of all and beloved by everyone at that facility.

To send flowers to the family or plant a tree in memory of Betty Inez (Geary) Riebli, please visit our floral store.