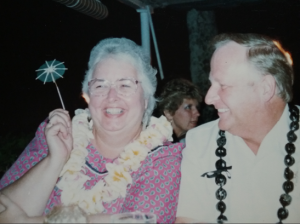 Elinore (Penny) Slemko passed away on August 5, 2020.  She was 81.  After having retired from Boeing, Penny lived the last 25 years as a resident of Fox Island.  She was an avid reader, enjoyed crossword puzzles, computer games, and mind-expanding game shows.  Most of all, Penny loved spending time with her family.

After high school, Penny worked in a department store before going to Kansas City to attend Airline School where she learned how to be a Reservationist.   Upon completion of her training, she chose Seattle from a list of potential work locations to begin her career with Northwest Airlines.

While at Northwest Airlines, Penny met and married the love of her life, Bob Slemko.   A little over a year into their marriage, Penny left Northwest Airlines to give birth to their first daughter, Debby.  During this same time, Penny and Bob bought their first home in Burien.  Penny remained a stay-at-home Mom, while Bob transitioned to work at Boeing.  Several years later, Penny gave birth to their second daughter, Suzanne.

Upon retiring from Boeing, Penny and Bob became snowbirds and traveled to Arizona each winter for 10 years.  Penny had an adventurous spirit and enjoyed travelling.  Her travels included numerous trips to several Hawaiian Islands, Indonesia, Bali, Singapore, Seoul, Hong Kong, and a cruise to Alaska.  She took many road trips to see both sets of parents throughout the U.S.A, along with day trips to Mt. Rainier, the Washington coast, and the Olympic Peninsula.  Other adventures included camping trips in a tent and eventually the luxury of a travel trailer.  She participated in many activities while camping, such as crabbing, bottom fishing, shucking oysters, biking, and board/card games in the evenings.

Penny’s inquisitive and gregarious spirit was appreciated by everyone she met.  She will be dearly missed by her family and friends.

Penny wanted us all to remember this poem by Mary E. Frye:

Do not stand at my grave and weep.
I am not there.  I do not sleep.

I am a thousand winds that blow.
I am the diamond glint on snow.
I am the sunlight on ripened grain.
I am the gentle autumn rain.

When you awaken in the morning’s hush,
I am the swift, uplifting rush
of quiet bird in circled flight.
I am the soft stars that shine at night.

Do not stand at my grave and cry.
I am not there.  I did not die.

To send flowers to the family or plant a tree in memory of Elinore Ann Slemko, please visit our floral store.

You can still show your support by sending flowers directly to the family, or by planting a memorial tree in the memory of Elinore Ann Slemko
Share a memory
© 2020 Haven Of Rest Gig Harbor. All Rights Reserved. | Privacy Policy | Terms of Use