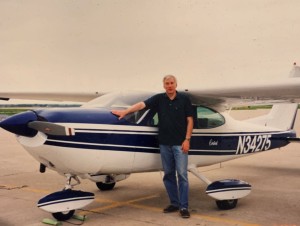 Frederick Nicholas Michael Hanson passed away peacefully on March 10th, at home surrounded by his loving family. He will be greatly missed.

Fred was born on April 14th, 1939 in Dearborn Michigan. He graduated from Roosevelt High School in 1957. He went on to study Engineering at Case Western Reserve University in Ohio where he graduated with a BS in Mechanical and Electrical Engineering in 1961. Fred also held a Masters Degree in Systems Management from the University of Southern California.

He began a long career with Rockwell International in the Autonetics Division. A Field Engineer, he worked on the early development  and field testing of the Ships Inertial Navigation System (SINS). He began in Anaheim Ca. and then to the Mare Island Naval Shipyard, PSNS, where he met the love of his life, Lee Harvey.  They married in St. Peter’s Chapel and began their life in Vallejo, Ca.,  raising two children together. Fred enjoyed family life, camping, boating, Nascar races, remote controlled airplanes, BBQ’s and obtaining his Pilots license. Flying would remain a lifelong passion that he would share with daughter. He would crisscross the country on family vacations visiting family in the South  and back East . Believing “travel to be the best education” he took his family on a two month motorhome  tour of the United States visiting many beautiful National Parks  and historic sights. Fred moved the family back East to Connecticut in 1978 where he worked on the Inertial Navigation System on the Trident Nuclear Submarines being built at Electric Boat in Groton. He and the family enjoyed four years living on the Thames River in a historic Cape Cod home in the quaint village of Gales Ferry.

Moving  to the PNW in 1982,  Fred began hiking and mountain climbing. He summited Mt. Rainier twice as well as many others in the Cascade and Olympic Mountain Ranges. He and Lee, lived in their storybook cottage on the Port Washington Narrows in Bremerton Wa for 19 years while he finished his career at Naval Submarine Base Bangor, retiring at age 57.

Fred built his wife’s dream home in Gig Harbor Wa and enjoyed travelling the world with Lee; writing his own computer programs, hanging out at his hangar, working on airplanes with his friend David,  flying his Cardinal 177 all over Wa, OR and Canada, often with his daughter and grandchildren in tow. “Papa” as he was known to his beloved grandchildren loved taking them on “trail hikes, “ helping them with school and Scout projects, attending Little League, soccer ,cheerleading ,football and LAX games, Always there to love and support them at every school and church program, he was an incredible role model, husband, father, son, brother and grandfather!

Due to the current health crisis, a Memorial Service in Fred’s honor will be held at a later date. We will post the details here as well as in the local paper and FB.

A service summary is not available
Share a memory
© 2020 Haven Of Rest Gig Harbor. All Rights Reserved.