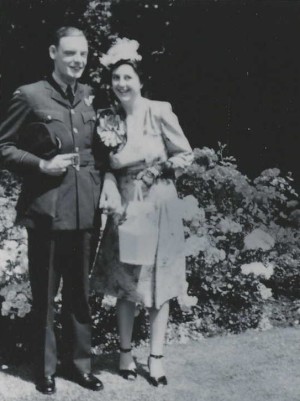 Kay Robertson was born Gabriella Katharine Loewi in Venice, Italy on April 23, 1920, the firstborn child of Adolph Loewi and Katherine Peters Loewi. At the time of her birth, her father was the Honorary German consul to the City of Venice and the family resided at the consulate (now known as Palazzo Nani Mocenigo).

Kay learned the business of art and antiquities from her father, who was a renowned expert and member of the Bernheimer family art and textile house in Munich. Under her father’s tutelage, she became an expert in antique silks and velvets by handling scraps and remnants from his firm’s projects and learning to identify their origins. Her handmade album of these scraps that she identified through the course of her training now resides at the Frick Collection in New York, where it provides clues to the provenance of silk and velvet textiles from the medieval and renaissance eras.

Kay began working for her father in 1938, as his firm completed the interior of the Italian Embassy in Paris. Only 18 years old, Kay designed and oversaw the construction of the embassy’s dining room ceiling, drawing it from memory based on a similar ceiling she had seen once in Sicily. The room today is essentially unchanged from its original design.

In 1939, the Loewi family moved to the United States as refugees from the situation in Europe. They lived temporarily in New York, until they fell in love with Los Angeles because of the Mediterranean climate similar to Venice.

During World War II, just after Kay became a U.S. citizen, she met her husband William “Bill” Robertson, an airman in the Royal Canadian Air Force while he was on leave in Los Angeles. Never one for formality, Bill coined the nickname “Kay,” which she fondly kept for the rest of her life. The two were married in 1945 in Victoria, British Columbia.

After the war, Bill and Kay settled into life together in Los Angeles. The couple would have three children, James (1946-1952), David (1947-), and Jane (1952-1962). James and Jane were both tragically lost as children, “Jimmy” to a sudden heart failure and “Janie” to complications of cystic fibrosis.

Kay and Bill were partners in life and in business. When her father retired, Bill and Kay purchased the assets of Adolph Loewi Inc. and reorganized as Loewi – Robertson Inc. For next 30 years, fine works of art passed through their hands on the way to decorate the homes of old-world nobility, new-world royalty (i.e. Hollywood movie stars) and major museums throughout Europe and North America.

After Bill’s death in 1986, Kay continued the business on her own and remained an active art dealer, traveling often to Europe and throughout the United States until well into her eighties. Kay made numerous generous donations of rare textiles to collections at the Metropolitan Museum of Art in New York, the Chicago Art Museum, Cleveland Textile Museum, the Caramoor Center for Music & the Arts, the Los Angeles County Museum of Art, and the Victoria and Albert Museum in London.

Kay was an avid amateur mineralogist, appreciating mineral specimens for their aesthetic and scientific merit. She began collecting minerals in childhood, picking up the hobby again as a young woman in 1942. The 1940s also began her association to what was then called the Los Angeles County Museum of Natural History and Art; while the connection began with helping to put on a textile exhibition in 1943, she was for decades a volunteer and supporter of the Museum’s mineral collection, where many specimens she donated are still on display.

By the 1950s and 1960s, Kay had become involved in the southern California mineral collecting community and became a leader in several local groups. By the late 1960s, thanks to her curiosity, enthusiasm, fantastic memory, and fluency in multiple languages, she became one of the world’s experts in German and European minerals and their localities.

Kay was a founding member of Friends of Mineralogy in 1970 and served on the board of directors for many years. In the 1990s, when health changes prevented her continued close involvement, she made a farewell gesture by donating an endowment to create an annual “Best Educational Case” award to be given by the Friends of Mineralogy at the Tucson show. The award is still given to this day and has posthumously been renamed the “Kay Robertson Educational Display Award.” In 2015, a newly-identified mineral was named to honor her contributions in amateur mineralogy: kayrobertsonite.

Kay was the last living member of her family that emigrated to the United States from Italy in 1939. Kay is survived by her son David Robertson (and his wife Janet), two grandchildren (Jessica Robertson and Katie Malik), and two great-grandchildren (Jessica’s son and daughter). Funeral arrangements were made by Haven of Rest in Gig Harbor, and a private burial took place at the Vaughn Community Cemetery on March 27th. In lieu of flowers or a public memorial service, donations in memoriam may be made to the Friends of Mineralogy or the Cystic Fibrosis Foundation.

To send flowers to the family or plant a tree in memory of Gabriella Kay Robertson, please visit our floral store.

You can still show your support by sending flowers directly to the family, or by planting a memorial tree in the memory of Gabriella Kay Robertson