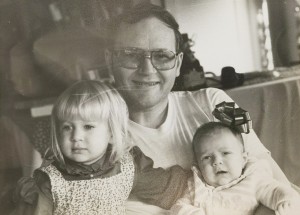 George Carrol Howe drew his final breath on the morning of Thursday 9 September 2021.  He had been diagnosed with kidney cancer, initially discovered in his lungs, over three years earlier.  Thanks to expert medical attention and loving care from his wife Kim, his illness barely slowed him down until quite close to the end of his life.

His biography begins in 1942 when George was born in Klamath Falls, Oregon to Carrol and Marjorie Howe.  He had a loving but challenging childhood as the son of a schoolteacher and a local school superintendent who later became an Oregon state legislator.  After graduating Henley High School, he briefly attended Oregon State University before joining the Navy and doing a tour of duty during the Vietnam War.  Upon return from the war, he was married to his first wife Judy and they lived together near Sacramento, where he worked as a technician at the Sacramento Army Depot.  Eventually returning to Klamath falls he got an Electrical Engineering Technology degree from Oregon Institute of Technology, where he was one of the first students to work with early computers – cementing his lifelong distaste for their use.

He began his career with Xerox in Rochester NY in 1972 but soon moved to Seattle Washington.  The Pacific Northwest became his permanent home as it granted him opportunities to pursue his lifelong interests in mountain climbing, sailing, camping and hiking, kayaking and otherwise spending time in nature.  Sometime after he and Judy were divorced, a friend, concerned about his diet, purchased for him some cooking lessons where he met his second wife Anne Swithinbank (Howe).   The two of them were married in 1979 and cooking became another fulfilling hobby, enjoyed by both himself and all the friends and guests with whom he shared his talent.  The couple spent many years together in Seattle raising their children Laura and Daniel.

In 2000 George retired from Xerox after 37 years and he and Anne moved to Raft Island in Gig Harbor.  Here George had a spiritual awakening and finally embraced sobriety.  In 2004 Anne died suddenly of cancer.  During this time George was very grateful to find the unwavering support of the alcohol recovery community in which he was to find many close friends and opportunities for service and personal development.  George was not sure if he would love again, but he found his final love in Kim Heatherly, a nurse and mother of teens, originally from upstate New York.  In 2005 they began a romance, and they were eventually married in 2012.  Together they farmed and tended their impressive garden, traveled and explored the world together on cruises, camped and hiked, cooked feasts, and had many adventures.

He was known for his vast and varied knowledge on many subjects, his sense of humor, his insight and integrity, and his caring spirit.  Over a long life he was often on the vanguard of history, from his keen interest in popular music as a young person, to his technological career, to his concern for the world around him.  On being diagnosed with incurable but treatable cancer in 2018 George expressed gratitude for his blessings and faced death with honor, courage, and good cheer that was an inspiration to everyone in his circle.  He was fond of reminding us that he had lived a full rewarding life full of love and joy.  He will be buried on Thursday at a small, closed service in accordance with his wishes.  There will be a public memorial as yet unscheduled possibly mid or late October.

He enjoyed close relationships with survivors, Kim Heatherly, his devoted wife, his son and daughter Daniel and Laura Howe, stepson Kyle, and two grandchildren Anne and Loren Canaday, as well as a large community of friends who will miss his wisdom and levity.

To send flowers to the family or plant a tree in memory of George Carrol Howe, please visit our floral store.