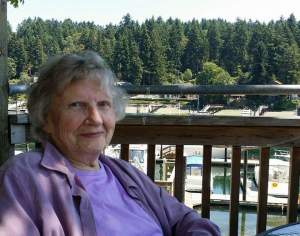 Helen Grace Kain, 94, graduated to glory on May 23, 2021 in Cheney, WA surrounded by her beloved family. She died as she lived – with grace and joy and unshakeable faith in her Lord and Savior, Jesus Christ.

Helen was born on January 3, 1927, to Aylor and Anna Jones in Kellogg, IA. She was the fifth of six children, all of whom have preceded her in death. Her family eventually settled on a farm in Monroe, IA where they attended First Baptist Church.  It was here, on a Sunday evening in 1939, that Helen and her closest sibling, Doris, accepted Christ as their personal Savior. It was the most important decision of her life, and she was baptized a year later.

Helen met her future husband, Johnnie Monroe Kain, in the 9th grade at the Monroe High School. After graduating as Valedictorian of the class of 1944, Helen began dating Johnnie. Their first date and many others were spent attending church. As a result, Johnnie, too, accepted Christ and was baptized. It wasn’t long after that they decided to spend their lives together as Mr. & Mrs. J.M. Kain. They were wed on September 1st, 1945 at the same church where they both accepted Christ. Since both of them came from farming families, it was no surprise that they rented a nearby farm and began their married life as farmers. It was there that they welcomed their first child, Beverly Grace, in 1947. Sometime that winter, Johnnie felt God calling him to train for the ministry, so they packed up and moved to Nebraska to attend Omaha Bible Institute. Shortly before graduation in 1950, their family expanded with the birth of Mary Esther. After spending the summer in mission work with the American Sunday School Union, Johnnie and Helen felt called to foreign missions. Johnnie was ordained in September of that year, after which they moved to Iowa City to attend the University of Iowa in pre-med.

In his second year of study, God redirected Johnnie into the pastorate. He accepted a position at the Regular Baptist Church in Algona, IA shortly after their 3rd daughter, Lois Ann, was born in 1952. Thus began Helen’s secondary “career” as a pastor’s wife, her first and dearest being a full-time homemaker and mother. Over the next 40+ years, God touched hundreds of lives through Helen as she supported her husband’s ministry wherever the Lord led them. During the first five years of ministry in Algona, two more children were born, Joann Ruth in 1954 and John Andrew in 1957. From there, God called them to First Baptist Church of Perry, IA in 1958. They served there for over six years, and their family expanded with two more daughters, Rachel Faith in 1960 and Carolyn Sue in 1961. It was in 1964 that God led them to accept a pastorate at First Baptist Church of Bellevue, WA, so they packed up their family of nine and moved across the country.

The next eight years were very full as they poured themselves into ministry and completed their family with the addition of three more children, Daniel Paul in 1967, Beth Anita in 1969 and Sara Jean in 1972. Six weeks after the birth of this tenth child, they moved back to Iowa. The next five years Helen described as the most difficult of her life as Johnnie took a break from the pastorate to work as a representative for his alma mater. This job required lots of travel and Helen was often left alone to parent seven children (the three oldest were married by this time) and manage the small farm they lived on between Des Moines and Ankeny. Through it all, Helen leaned on the Lord and selflessly served the needs of her family. She would say that the joy of the Lord was her strength.

In 1977, Johnnie and Helen returned to full-time ministry and made their last cross-country move with their five youngest children to Calvary Baptist Church in Bremerton, WA, a small, struggling congregation that was about to close its doors.  This was quite a leap of faith as financial support had to be raised to sustain the family, but Helen was unwavering in her dedication to the ministry. She worked tirelessly, stretching their budget and even driving a school bus to help pay tuition for the private school her children attended. God blessed this ministry mightily and it wasn’t long until it was fully self-supporting. Helen’s amazing gift of hospitality was used by God to bless many as she readily welcomed countless Navy singles and families into her home and heart. Her Sunday after-church dinners were legendary! Of course, this was in addition to teaching Sunday school, singing special music, acting as church secretary, and anything else that needed doing. All the while she finished raising her children – her last child graduated from high school when Helen was 63 years old!

After fifteen wonderful years in Bremerton, Johnnie and Helen retired from full-time ministry in 1993. By this time, all of their children were married and they had nearly 20 grandchildren. After a year of RV travel, they settled in Auburn, WA and enjoyed four more years together, travelling, visiting family and friends and enjoying the fruit of their labor. After nursing her husband through a long season of failing health, Helen was widowed in November, 1998. The next few years were full of travel as she continued to serve and bless her family and friends. She eventually moved to Lacey, WA in 2005 and then to Cheney, WA in 2019 with her daughter Carolyn’s family, who have lovingly cared for her for the last fifteen years. Throughout these years, she has joyfully welcomed many more grandchildren, great-grandchildren and even a great-great-grandchild until her family now numbers 114! Her second great-great-grandchild is expected later this year.

What a lady! What a legacy! This brief history barely scratches the surface. Besides being a devoted pastor’s wife, mother and grand-mother, Helen was a lifelong learner and lover of books (especially the Bible), an accomplished seamstress, an exceptional cook, a patient teacher of everything from sewing and canning to spelling and math, an avid sports fan, a talented alto singer and so much more. Her ability to remember birthdays and anniversaries was astounding, as was her memorization of all the verses of hundreds of hymns. Her faith in Jesus was unwavering to the end and in her final days, as her family gathered around her, she kept repeating, “God is good. God is faithful. Follow Him – He’s the best leader. Live for Him, not for yourself, and you’ll have the best life.” And that’s exactly what she did. Her lifelong goal and dying wish was that all her loved ones would walk with Jesus and join her in heaven.

Helen was a living example of the Proverbs 31 woman, and so her children rise up and call her blessed. “Many women have done excellently, but you surpass them all. Charm is deceitful and beauty is vain, but a woman who fears the Lord is to be praised. Give her the fruit of her hands, and let her works praise her in the gates.” Proverbs 31:29-31

Memorial gifts in lieu of flowers to:

To send flowers to the family or plant a tree in memory of Helen Grace Kain, please visit our floral store.