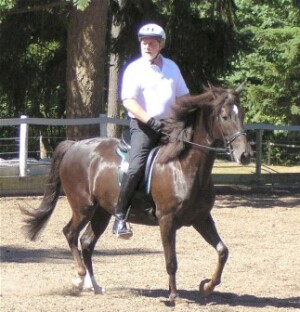 John Nicholas D’Addamio, 76, of Longbranch, WA passed away on October 4, 2022. Formerly from Monroe, WA, John and his wife Jan had retired to a farm in Longbranch for the past nine years.

John was born in Plainfield, NJ and spent most of his early life on the east coast. He graduated from Rutgers University with a BS in Psychology and an MS in Computer Science. John was a VietNam veteran, serving in the US Army from 1968 to 1970.

After his military service he earned his MS degree and then worked for defense and computer companies including Western Electric, Lockheed-Martin, Digital Equipment, Compaq, Boeing, and Microsoft. During his professional career, he became knowledgeable in many fields, including military air traffic control and computer operating systems.

John married Janice Jackowski in 1972, and they both became involved with the Morgan horse breed.  Following the purchase of their first Morgan in 1975, John developed a keen interest in Morgan pedigrees. Using his tech skills, John created a computer program to compute the inbreeding coefficient  for Morgan horses at the UVM Morgan Horse Farm. John ultimately gave this program to the American Morgan Horse Association for breeders to use in pedigree analysis.

John and Jan lived in New Jersey for a few years and then moved to a farm in southern New Hampshire in 1977.  After 11 years in New Hampshire, they moved to a new farm in Monroe, WA.  They became interested in the Lipizzan horse breed, and just as he did with the Morgans, John soon became an expert on these rare and wonderful horses.

Whenever he could, John attended Lipizzan breeding seminars and horse evaluations, taking part in many of them over the years. By coordinating riding clinics featuring one of the riders from Vienna’s Spanish Riding School, John was instrumental in bringing part of the Lipizzan heritage to Washington state. He also helped to run the clinics themselves as well as participating in them for more than 10 years.

Similar to his work with the Morgan horses, John helped the Lipizzan breed in America by contributing his tech knowledge. He supported the United States Lipizzan Federation by serving on the website committee.

John developed an avid interest in dressage and its history after working with Dr. H.L.M. Van Schaik, who had both practical and theoretical dressage experience. John read many books on the subject, amassing a large dressage library and rode with many notable dressage greats including Paul Belasik and Andreas Hausberger. He readily passed on his knowledge to other riders to help with training of their horses.

His knowledge of history wasn’t limited to horses.  An avid reader, John loved learning the history of an astounding array of subjects. But his love of history was just one facet of his passion for life. John was what some would call a Renaissance man.  Friends who joined him on a trip to his beloved Vienna Austria said he excelled as a museum docent, Viennese food critic, and expert tour guide.  John also loved music and was an ardent musician, playing and teaching classical guitar.  He was an outstanding cook and became a smoke master in his later years.

John is survived by his wife of 50 years, Janice, his mother Evelyn, his brother George and wife Betsy, his nephew Sean, nieces Danielle and Kate, several cousins, and four much-loved horses

No one who knew John will ever forget him.  With his amazing intelligence and his willingness to share his knowledge to help both horses and humans, he made the world around him a better place. He will be greatly missed.

To send flowers to the family or plant a tree in memory of John Nicholas D'Addamio, please visit our floral store.

You can still show your support by sending flowers directly to the family, or by planting a memorial tree in the memory of John Nicholas D'Addamio
© 2022 Haven Of Rest Gig Harbor. All Rights Reserved. | Terms of Use | Privacy Policy | Accessibility