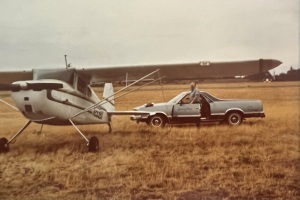 Larry Arthur Martin (March 12, 1935 – May 9, 2022) was born in Omak, Washington. The family moved to Lakewood, Washington in his early years. After graduating from Clover Park High School in 1954, Larry joined the family business Lakewood Floor which became his lifetime career.

Larry was blessed with a large and loving family. After eloping with Ann in 1967, they enjoyed 55 years of marriage. One of his proudest accomplishments was getting his pilot license at the very early age of 17. He got a kick out of saying he learned in a seaplane on American Lake.

Driving was another passion which led him to drive the youth from Peninsula Lutheran Church on several mission trips. He also loved driving his family on vacations in their motorhome. Hunting, fishing, and motorcycle riding were other outdoor activities that rounded out his multifaceted personality. His large cache of knowledge in many areas made helping others a favorite pastime.

In lieu of flowers, donations can be made in Larry's name to the Gig Harbor Fire and Medic One. District 5. 10222 Bujacich Road, Gig Harbor, Washington 98332.

To send flowers to the family or plant a tree in memory of Larry Martin, please visit our floral store.

A Memorial Tree was planted for Larry