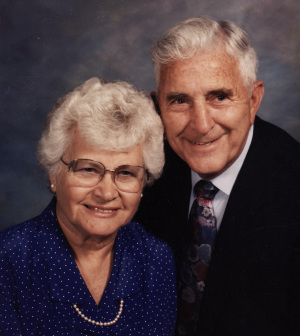 Lois was born on December 4, 1924, to Cecil and Thelma Fassett at their home in Gig Harbor. The day was bitterly cold, so to keep baby Lois warm, they wrapped her up and placed her on the open door of the wood stove. Thereafter, it was a family joke to remind her she was only “half-baked.” Her sister, Doris, was born 16 months later.

At the start of the Depression, the Fassett family moved to Tacoma, starting a cycle of house moves and school changes. By the time Lois entered Roy High School, she had lived in 14 houses (including a brief stay in a boxcar) and had gone to 8 schools in the Tacoma, Parkland and Spanaway areas. At Roy, there were only 32 kids in her class allowing Lois to participate in all activities, play on all the ball teams and, along with her sister, sing in the trio, octet and choir.

Of growing up during the Depression, Lois wrote: “I don’t think Doris and I knew how poor we were because everyone was in the same condition. I was in the 7th grade before I got a blouse and skirt instead of hand-me-downs or homemade dresses. For Christmas Mom made us pajamas out of flour sacks and we loved them! We kept a cow in the garage for milk. Dad hauled wood 7 days a week but didn’t get paid too often because people didn’t have any money. But he wouldn’t let them go without wood.”

Music was a major part of Lois’s life. Everyone sang and played various instruments. At a very young age Lois and Doris learned to tap dance and mastered harmonies. Their Aunt arranged for them to perform on-stage for various organizations, frequently winning prizes at local amateur hours. They also sang as a trio, often with their Dad and, at times, their cousin Marilyn. However, Lois recalled her dread before those performance since Doris and Marilyn would quite often break up laughing, leaving her singing an alto solo. Throughout their lives there was always music after dinner, on the beach or around a campfire.

Lois was very athletic, playing basketball and softball throughout school and in college. She later became a referee for women’s basketball teams in Tacoma. Lois was also a certified swimming instructor, teaching disabled children, many of them thalidomide babies. In her teens, Lois started duck hunting with her Dad and became a really good shot, usually bringing home a duck or two. She learned to drive when she was 11 and also became proficient in operating her Dad’s boat. She told many a story about driving on treacherous roads and plying the stormy waters of Puget Sound.

Growing up, the Fassett family was very close to Aunts, Uncles and cousins on both sides of the family, maintaining strong, loving bonds all of their lives. Lois shared many stories of childhood adventures and games, picking raspberries during the summer, musical performances, dinners, and holidays as well as trips to visit the “California cousins.” Family reunions became a yearly event, many of them hosted on Fox Island.

In 1943, the Fassett family moved to Titlow Beach in Tacoma and Lois started working at a grocery market in Tacoma. While there she had her first encounter with blue cheese, learning the hard way that the blue spots were not mold and she didn’t have to spend hours cutting them out. Even though Lois thought higher education was beyond her means, she had saved $70.00 and found out that was enough to pay for the first year. So that fall she started at the College (later University) of Puget Sound in Tacoma. She recalled there were only about 100 men on campus and by the end of the year most of them had joined the service.

At CPS, Lois tried out for all women’s sports, made “first string” on all teams and was named to the Women’s Athletic Association. With her athletic prowess she earned a PE Scholarship which enabled her to stay in school and turned into her major. She joined the Loggerettes, a marching group who performed during football games until they had to disband because there weren’t enough men on campus to field a team.  Her greatest honor was being tapped for Spurs, an honorary group that ushered and provided service at the college. She was also the senior class Vice President.

Finally, the war was over and the men were coming home. In 1946 a returning vet, George Miller, approached Lois and asked her out to a ball game. They went steady all that year and he proposed in the fall of 1947. They were married after graduation on June 7, 1948, by the President of the college.

They first moved to Sumner where George started teaching and coaching at the High School and Lois was hired to teach Health and PE at Puyallup Junior High. Her beginning salary was $2,200 for the year. They bought their first house on a long, dead end street that soon filled with families and lots of kids. Their children, Janice, Cathy and Mike were born while they lived in Sumner.

In 1951, Lois’s parents, Cecil and Thelma Fassett, moved to Fox Island and lived in a little cabin with no electricity or indoor plumbing. Lois and Doris and their families began to spend weekends and summers on the beach, traveling first by ferry then, after the Fox Island bridge was built, by car and eventually by boat. It was on this beach that the family “breakfast-on-the-beach” tradition was born.

When George accepted a teaching job in Tacoma, the family moved to University Place. Lois’s sister Doris and her husband Verner Larson, and their two boys, Dan and Gary, lived nearby. Lois became actively involved in school activities and Girl Scouts.

Lois’s involvement in Girl Scouting started during summer breaks in college when she worked at a Brownie Camp on Mercer Island. From there, Lois organized and ran Day Camps in Puyallup, Sumner and Tacoma. She was a Brownie/Girl Scout troop leader for 13 years for her daughters. Lois loved to backpack and camp and taught her Scouts to do so in all conditions, including primitive camping where they pitched tents, dug latrines and lashed together tables. She taught them to cook over a campfire, how to survive in the woods and, playing the ukulele, taught them many songs around the campfire. Most importantly, Lois provided great support and inspiration to her Scouts.

In the late 1950s, the Millers and Larsons built summer cabins on the high bank portion of the Fassett property on Fox Island. With the assistance of Nelly the horse, cabins were built on pilings out over the water. Lois remembered: “We had many years of enjoyment while our kids were growing up. We’d hop in our boat at the Sixth Avenue Boathouse on Friday evening, run over to the cabin, and return on Sunday evening.”

While Lois loved to sleep under the stars, George preferred to sleep with a roof over his head. So in 1964 they bought their first travel trailer. In addition to camping and fishing trips around Washington, the trailer was also used for cross-country family trips when George went on his two-week Naval Reserve trainings each summer.

In 1965, the Millers were selected to host Curtis High School’s foreign exchange student, Patty Leon from Chile, for the 1965-66 school year. Lois maintained a close relationship with Patty for the rest of her life.

In 1968 George and Lois built a house and moved to Fox Island full-time. Lois’s parents, Cecil and Thelma came to live on their property. At that point, Lois decided it was time to return to work. Rather than renew her teaching certificate, she started working at the Fox Island Post Office becoming Postmaster in 1973, serving the community until her retirement in 1987. Because of her knowledge of the Island and her dedicated customer service, she once successfully delivered a letter addressed only to “Grandma.”

Lois’s father, Cecil, was instrumental in the founding of the Fox Island Museum and he served as the first curator. George and Lois purchased and donated the property for the current facility and in 1980, upon his retirement and completion of the building, George became the curator and Lois was actively involved cataloging the collections and serving as docent. She was also involved in the Fox Island Garden Club, San Souci, and the Cemetery Board.

With the kids out of college and well on their way to successful careers, marriages and families, George and Lois started seriously traveling. They went on cruises, Elderhostel adventures, historical quests, and church missions in the states and around the world. Highlights include trips to England, Chile, and Romania.

Through their strong Christian faith, they became founding members of the Fox Island Alliance Church and later joined Believers Fellowship in Gig Harbor. In 1984 one of Lois’s dreams came true when they built a new home right on the water. Over the years, they generously opened their home to many families as they transitioned into the community.

George and Lois shared a loving, family-oriented, Christian-based marriage for 54 years until his death in 2002. Lois’s faith, strong connections and friendships in the community, neighbors and, of course, her close family, became her rock. One of her greatest joys were her grandchildren who loved coming to “Grandma’s beach.”

Lois’s beach continued to be a beacon for family gatherings and reunions, celebrations, parties, weddings, picnics, BBQs, and was the perfect location for 4th of July fireworks! And, as always, lots and lots of breakfasts-on-the-beach.

Lois was well known for her apple pies made from apples grown behind her house, as well as her caramel corn, dinner rolls and Grandma Miller cake. Her fingers would turn brown every fall as she battled the squirrels for the walnuts on her tree. And, of course, there was the buttermilk pancake batter that always tasted amazing when cooked on the griddle over a beach fire.

As her health declined, Lois moved to an adult family home in Rosedale, in the Gig Harbor area, until her death on June 8, 2021. Our thanks and deepest gratitude go to the staff at Family First Adult Family Homes for providing loving care for the past 2 ½ years.

Throughout the years, even as dementia began to slowly take her memory, Lois always maintained her sweet, kind, cheerful, positive, easy-going manner. She never complained and was always grateful and appreciative. She never had an unkind or negative word to say about anybody. She loved her family and friends unconditionally and she will be greatly missed.

Lois was preceded in death by her parents Cecil and Thelma Fassett; her husband, George Miller; sister and brother-in-law, Doris and Vern Larson; and nephew, Dan Larson.

In lieu of flowers, remembrances may be made to the Fox Island Historical Society and Museum, PO Box 242, Fox Island, WA 98333.