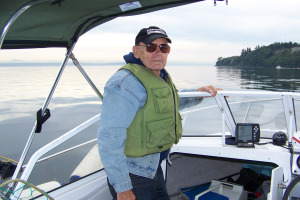 Melvin “Mel” Franz, 95, passed away January 29, 2021 from complications from a fall at his Gig Harbor residence.  Mel was born on July 7, 1925, putting him within what journalist Tom Brokaw described as the “Greatest American Generation”.  He was a survivor of the Great Depression, a proud WWII veteran, and blue-collar worker who exemplified the successful middle class of the 1960’s.  This enabled him to pursue his real passion – sport fishing.  Mel also loved playing card games like pinochle, cribbage, and poker.

Mel was the youngest of five brothers born to Jacob and Mary Franz on the family’s small farm in North Dakota, near the town of Kulm.  He was the grandson of German Immigrants who left German settlements in Russia’s southern province of “Bessarabia” in the 1880’s to claim homesteads in the Dakotas.  As a child, Mel endured the hardships of Midwest farm life during the “Dust Bowl” years.

World War II provided Mel with an opportunity to see what lay beyond to the isolated world he knew.  At age 17, he signed up with the Merchant Marines and trained as a seaman.  This put him in harm’s way on “liberty ships” that were under constant threat of submarine attack, but he managed to sail around the world without serious incident.  He, and his fellow Merchant Marines, were belatedly granted veteran status by Congress in 1988 as acknowledgement for the high casualty rates they suffered in the war.

When the war ended, Mel was discharged from the Merchant Marines in Los Angeles, where he met the love of his life, Doris Vivian Isaak.  They had much in common as she was also a grandchild of German immigrants from Bessarabia.  They were married on June 19,1946 and chose to build their life together in the Pacific Northwest where Mel could hunt and fish.  Mel took up the trade of newspaper printing, and in 1955, they settled into a home in Seattle’s north end.  Mel worked at several small Seattle print shops before signing on at the Seattle Times.  He remained at the Times up to his retirement in 1990.  He also joined the Lake City Elks Club and served on its board of trustees.

In retirement, Mel and Doris made many road trips across the U.S. and Canada in a pickup and camper. In 2006, they sold their Kenmore home and moved to “The Lakes” retirement village in Gig Harbor, and Mel continued to fish locally to the extent his health would allow.

Mel is proceeded in death by all his brothers and his beloved wife of 68 years, Doris.  He is survived by a son and daughter-in-law, Richard and Marilyn Franz.  He is also survived by a grandson and his wife, Douglas and Katie Franz, and their twin children, Nolan and Hadley.

To send flowers to the family or plant a tree in memory of Melvin Franz, please visit our floral store.

You can still show your support by sending flowers directly to the family, or by planting a memorial tree in the memory of Melvin Franz
Share a memory
© 2021 Haven Of Rest Gig Harbor. All Rights Reserved. | Terms of Use | Privacy Policy