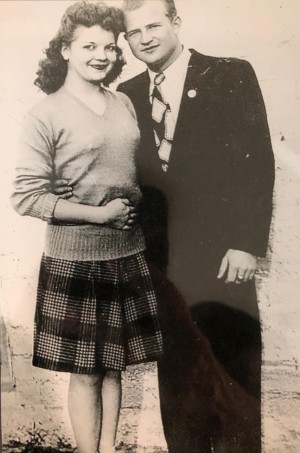 Melvin E. Swanson died October 11, 2021 at his home.  The Heritage House in Las Vegas, Nevada.  He was just 3 weeks shy of his 96th birthday.  He is survived by his wife, Janet, whom he was married to for 76 years.  They have four children; daughters Judy Swanson and Barbara Lakin and twin sons Merle Swanson and Merrill Swanson.  Grandchildren Mark, Michelle, Merrill II, Kristin, Shelley, Jeremy, Eric and Shane.  Numerous great grandchildren along with a handful of great-great grandchildren.  He is preceded in death by his four brothers, two sisters and his granddaughter Jodie Cerna-Bolen.

Melvin was born in 1925 on a farm in Slayton, Minnesota and was a confirmed Lutheran.  He moved to Los Angeles where he met and married Janet Dickinson, from Arkansas.  He served in the Merchant Marines during the Korean War.  Mel and Jan stated in Los Angeles and raised their family through the 1950's and 1960's.  It was truly a "Happy Day's" time.

Mel and Jan loved working together.  After raising their kids and many business ventures, they called themselves "snow birds" as they shared time living in both Las Vegas and Gig Harbor for a number of their semi-retired years.  Eventually, they would move back to Las Vegas, enjoying full time retirement where they enjoyed time together playing Sequence, working in the yard, attending Saint Andrew Lutheran church and entertaining friends and family.

In lieu of flowers, the family is asking that in honor of others suffering from Alzheimer's you may donate to:  act.alz.org/goto/Melvin_Swanson.

To send flowers to the family or plant a tree in memory of Melvin Everett Swanson, please visit our floral store.

You can still show your support by sending flowers directly to the family, or by planting a memorial tree in the memory of Melvin Everett Swanson