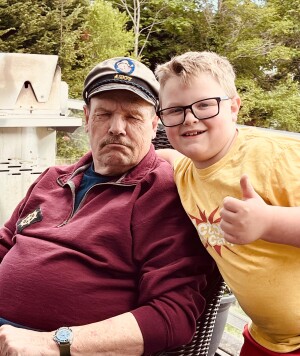 Michael D Robinson, beloved father, brother, and grandfather, died unexpectedly on Monday, May 30, 2022, at the age of 72, while involved in a tragic accident at his home in Gig Harbor, WA.

Mike will be remembered by his daughters, grandchildren, and family as a man who loved deeply, laughed often, and continued to learn. He was an avid reader, artist, collector and baker. Mike graduated from Puyallup’s Rogers High School in 1969, then enlisted in the United States Air Force. Following his military service, he married Pamela Tengesdal and had two daughters Sarah and Kellie. Although life provided turmoil and hardships, he was a fighter and protector, with a wicked sense of humor. He will forever be remembered as a giver, willing to sacrifice for others and put family and friends first.

He will be missed and remembered by many, including his daughters Sarah and Kellie, brother Bill, sister-in-law Sandi, sons-in-law Kyle and Tony and grandchildren Lily, Henry, Matilda, June and his cat “Baby”.

A Celebration of Life is scheduled for 11:00 am on June 25th at The Church of Jesus Christ of Latter Day Saints on Dorotich St. in Gig Harbor. This will be a combined service to also honor his mother, Lydia, who passed on in March. Flowers, donations and condolences may be sent in care of Haven of Rest 8503 State Route 16 NW, Gig Harbor, WA 98332.

To send flowers to the family or plant a tree in memory of Michael D. Robinson, please visit our floral store.

A Memorial Tree was planted for Michael