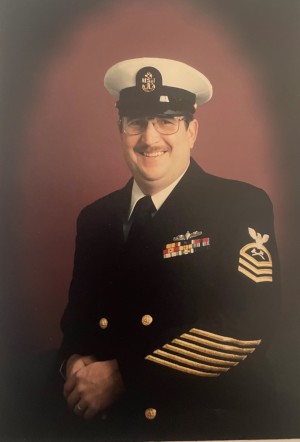 Born on March 6, 1952, to Charlie O. and Jeanne (Lester) Dent. Patrick grew up in Lake City and graduated from Nathan Hale High School in 1970. After graduation he joined the Navy where he served aboard the USS Wiltsie during Vietnam. After completing sea duty, Patrick continued his Navy career in the Naval Reserves, where he became Damage Control Chief DCC (SW) in 1993. He then joined Afloat Training Group until he retired in 1998 after proudly serving his country for 28 years.

During the Reserve years, Patrick continued his Civil Service career as a Department of Defense Guard, Police Line Officer, Sergeant and Lieutenant.  He retired in 2004 after 30 years of Civil Service.

On Nov. 2, 1984, Patrick married the love of his life, Robin (Shafer) Dent and shortly after, adopted their daughter Alaina. Patrick was a devoted husband, father, and grandfather and adored his daughter Alaina (Michael) Chatigny, and their three grandchildren, Austin Dent-Bancroft, Jaxson Chatigny and Karsyn Chatigny.

Patrick is also survived by his siblings, Lester (Linda) Dent, Mary Dent O’Connor, Katie (Dave) Tipton-Stevens and their children and grandchildren. Patrick was a kind, loving, patient man who was devoted to his family.

Patrick’s life will be honored on Wed. August 25, 2021, at 9:30am at Tahoma National Cemetery, with full Military Honors. Please remember him as the hero he was to so many.

In lieu of flowers, remembrances can be made to the University of Washington Medical Center.

To send flowers to the family or plant a tree in memory of Patrick Edgar Dent, please visit our floral store.