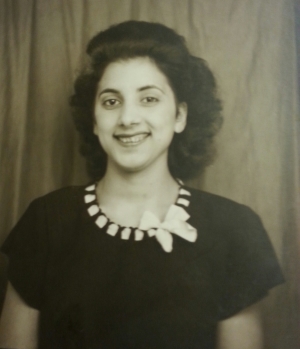 Pietrina (Pat) A. Bucher, 94, a Gig Harbor resident since 1975, died June 25, 2021. Pat was born in August of 1926 in New York, NY, to John and Anna Amodei.  Pat’s first language was Italian.  She learned English via daily interactions at school, and later at work.  One of Pat’s employers included the original Macy’s on 34th Street in New York City, beginning at age 16.  She worked as a Sales Associate, working up to a Sales Manager prior to her days as a wife and mother.  Pat would casually speak about her days at Macy’s, including how she walked in some of the Macy’s Day Parades, but it was just “normal” to her.  She would rather be out of the hustle and bustle and home with her mom and family.

In 1957, Pat moved to WA State and joined her sister and brother-in-law; met her husband, Charles W. Bucher, and became the loving wife, mother and homemaker we all knew.  To know Pat is to love Pat – she had a sense of humor and generous heart – always putting her children first and always accepting friends into her home for a meal.  If you didn’t have time for a meal, she forced you to take one with you.

To send flowers to the family or plant a tree in memory of Pietrina A. Bucher, please visit our floral store.