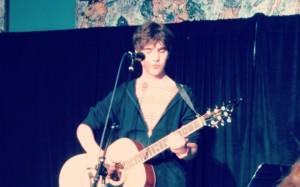 Solomon Athanasius Seelhoff-Lindsey was born May 6, 1995, in Tacoma, Washington.  He entered this earthly plane in his trademark creative fashion, in his own way and time, arriving in the back seat of his dad’s car on a chilly morning under sunny skies.  Solomon was named after the historic King Solomon, also known as Jedidiah, names which mean “peaceful,” and “friend of God,” and after Athanasius of Alexandria, a man who was consecrated and revered by many religious traditions for his courage and integrity.

Sol grew up on the Key Peninsula, the 10th of 11 children.  He attended Key Peninsula Middle School and graduated from Peninsula High School in 2014. After attending Olympic College for a short time, he transferred to The Evergreen State College, where he was a student at the time of his death.  When he died, he was just 34 credits short of receiving his bachelor’s degree in Art History.

Sol was, above all, a musician and artist.  He learned to play guitar from his brother John and sister Jennifer, also musicians, as a young boy, and immediately began composing his own songs and writing his own lyrics.  By his senior year of high school, he had performed at the Seattle Folk Life Festival under the name “Cuddly One.”  He went on to become a popular performer in local venues throughout the Pacific Northwest, in Seattle, Bremerton, Tacoma and Olympia, where he enjoyed and was loved by a growing fan base and community of musicians.  At the time of his death he was a rising star on the indie music scene, having garnered the attention and praise of artists whose work he had long admired, including the artist Xiu Xiu.  His songs were discovered by an international radio show producer via Spotify recently and were being played on The Comfy Show in the months immediately preceding his death.

Sol was extremely intelligent, perceptive, artistic, painfully and unsustainably sensitive, a gifted artist.  He never saw himself this way, though. He was humble, shy, kind, self-conscious, self-effacing, a private person. He didn't like to be the center of attention. Even in concert, his sensibilities were those of someone who just wanted to give to the world. He had important things to say, and he said them in his songs. Although he was a quiet person, in concert he held nothing back. His music is raw, visceral and powerful.

Nothing Sol did, or was, was ordinary. This was a matter of integrity and conscience for him. He did not allow the world to shape him into its mold. He proudly and defiantly -- but with unwavering sweetness and joy -- refused to conform to the brutalities of this current age. He recoiled over all injustice, cruelty and violence.  He enjoyed art, music, nature, ideas, long runs and walks, good movies and strong black coffee. He had a keen sense of humor, told the funniest jokes and laughed often, with his whole body.  He was a compassionate listener, a loyal and faithful friend and a devoted brother and son. We who loved him will miss him so very dearly.

Sol tells his life story in his own way in his music, his gift to the world. He recorded his music first under the name Cuddly One, later under the name Apistat Commander. His music can be found on

We love you forever, Sol!  We all miss you so unbearably dearly. We are so grateful to have walked this earth alongside you.  We will spread your ashes in the mountains of Norway, as was your wish. For now, Hail the Traveler, beloved son, brother and friend. May our memories of you lighten our grief. May the nature spirits, owl especially, guide you home, and the honored dead welcome you among them. May the High Ones grant you rest, and rebirth in due time. As it was, as it is, as it will be. We know we will see you again.