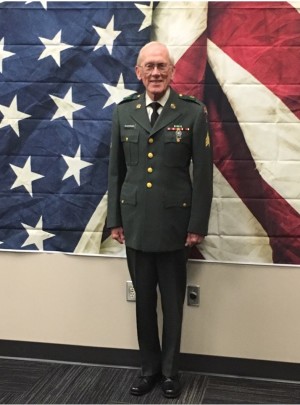 “But those who hope in the Lord will renew their strength. They will soar on wings like eagles; they will run and not grow weary, they will walk and not be faint…”  - Isaiah 40

We are flooded with fond memories as we pay tribute to a remarkable man. He held a deeply rooted faith and trust in God, a strong work ethic, and an enthusiastic zest for life. Most importantly, he kept his vow to take care of his family, through provision and prayer, giving the most precious gift of all in the time we had together.

Bill was born in Sturgis, Kentucky, a small farming and mining town to parents Lee Honest Glazebrook, and Lola May Dunning. Named after his uncles, William and Clarence, thus the name William Clarence, he grew up with several nicknames: “Glaze,” “Glazey,” and “Wild Bill.”

Bill’s deeply rooted faith developed in his early childhood where prayer played an integral role in his day-to-day living. Attending church, Sunday School, and annual revivals that lasted nightly for 7-14 days (“whew,” he’d say!”), he always enjoyed his Sunday School teachers and, pastors, recalling precious time when his mom read a Bible story nightly until he was long into elementary school.

In his younger days he enjoyed playing football and basketball with friends, bike riding, camping at Kentucky Lake, and angling for blue gill and catfish at the local watering hole. Forming a strong work ethic at a very young age, Bill stayed busy with household chores, earning money hauling in coal and ice for neighbors, as well as working on the hog & hay farm with his best childhood friend, Larry Holt. At 15, he was hired at the local Rexall Pharmacy & Drug Store as the soda fountain clerk - where for years he claimed the title “top notch soda jerk!” He also spent time passing out show bills for the upcoming movies at the small theatre in town.

Bill graduated from Sturgis High School in 1961, earned his Business Degree from American River College in Sacramento, CA, and served in the U.S. Army in Berlin, Germany as Sergeant WC Glazebrook, in the Provost Marshal Division. He was awarded the ARMY Commendation Medal of Meritorious Service.

In 1970, Bill met Jeanne attending the Baptist church in Sacramento, where he invited her to join the bowling league. After dating just a few short months, he proposed and they were married five months later. With enthusiasm, he would often to say to others, “I bowled her over!!” Their married life began in Cupertino, CA, subsequently moving to Dallas, TX where they started their family. With children, Jeff & Stefanie, born in 1973 and 1976, respectively, the Glazebrook family appreciated living in various states throughout the years: Louisiana, Ohio, and Washington.

For the last 53 years, Bill invested his time and energy into his sales career in the pipe, valve & fitting industry, where he’d recently retired from Baxter-Rutherford, Inc. after 33 years of service.

He also poured himself into the life of his family and others in the community. He prided himself on being the "biggest sports booster," cheering on his kids, grandkids and many surrounding families sports, events and various activities.

Methodical in his approach to life, one could often predict where Bill was at any given time or day of the week. Saturday mornings were spent doing “Suzie Homemaker chores,” stopping in to his local cleaners, pharmacy, barber & bank where he would frequent.

Bill enjoyed harbor walks with Jeanne, attending the Maritime parade, GH art walk, farmer’s markets, festivals and many other activities a small town brings. He’d be found on his deck, rooting on runners during the annual Turkey Trot, and joyfully participating in the lighting of the Christmas tree. With a heavy southern drawl, he energetically greeted all those he encountered, and especially loved having coffee at his town favorite, Java-N-Clay.

An integral part of his community, he maintained his “Head Usher” position at Harbor Covenant Church since 1986, where he’d exuberantly welcomed all with a smile and greeting with, “it’s open seating today, folks!” He was a long-time REACH Ministries supporter, volunteer, & faithful servant, known as - “an iconic pillar, loved by many, known for his high-energy, engaging, welcoming, fun, and loving way.” Bill made EVERYbody, feel like SOMEbody. Many people near and far are mourning Bill’s loss. One life lived, many lives touched.

A private family memorial was held at Haven of Rest in Gig Harbor, Washington, Friday, June 12th, 2020. After a brief committal service with military honors, Bill was interred at Tahoma National Cemetery on June 15th, 2020.

To send flowers to the family or plant a tree in memory of William Clarence Glazebrook, please visit our floral store.

Services are to be announced
Please note
We look forward to gathering later this summer for a Celebration of Life to honor his legacy.