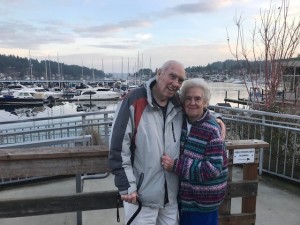 William H. Raine, 91, a Gig Harbor resident since 1975 went to his heavenly home on October 17, 2021. Bill was born in Long Beach, CA on October 7, 1930 to Loris and Elsie Raine. He attended Banning High School in Wilmington, CA where he met the love of his life, Joyce Raine. Bill and Joyce were married on July 15, 1951, having just celebrated their 70th wedding anniversary. Bill attended Long Beach City College (Jr. Rose Bowl Champions 1950) and Fresno State College where he earned a business degree and had a record breaking football career. Bill entered the United States Air Force in 1952 where he served his country faithfully. He was a successful business man and an avid sportsman. He attended Life Center Assembly of God for many years. Bill and Joyce were true entrepreneurs, having started several businesses from the ground up. While Bill was a visionary with excellent business instincts, Joyce was able to insure the business was a success with her eye for detail. After retirement Bill and Joyce traveled extensively and visited Hawaii annually where they were part-time residents. He shared his passion for all sports with his children and he was able to attend the very first Super Bowl I with his sons at the Los Angeles Coliseum in 1967. He later attended numerous Olympic Games but most of all Bill enjoyed watching his children and grandchildren participate in various sports.

Bill was a loving father to his four children, Lori Capurso of Olalla, WA, William (Billy) Raine (Karen) of Gig Harbor, WA, Michael Raine (Ruby) of Little Rock, AR and Janel Horwath of llwaco, WA. Bill had 8 grandchildren and 5 great-grandchildren whom he loved very much. He is survived by his brother Robert (Bobby) Raine (Virginia) of CA, his sister Ruthie Sheehan of CA, sister in-law and brother in- law, Jean and Ed Gosney of WA, brother in-law Jack McEwen of Gig Harbor, WA and Stephen Horwath of Gig Harbor, WA.

Graveside services for family only will be held at 12:30pm Saturday, November 6, 2021, at the Haven of Rest Cemetery. Remembrances may be made to the Fellowship of Christian Athletes, P.O. Box 1155, Orting, WA 98360 or online https://my.fca.org/areaofgreatestneed.

To send flowers to the family or plant a tree in memory of William H. Raine, please visit our floral store.